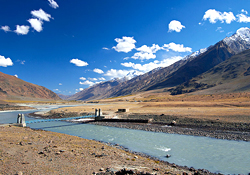 It means "the land of White Copper". Zanskar is the most stunning and the most remote area of Ladakh. It has got a number of small mountain locked valleys. The area was opened for tourists only in 1995.The origin of Zanskar is the confluence of two rivers that flow towards each other along the northern flank of the Great Himalaya and meet in the broad plain of Padum. The region receives a lot more snow than Central Ladakh. The mid-winter temperature at this place drops to -40 degrees centigrade. It is treated as one of the coldest habitats in the world. The valley spreads to an estimated area of 5000 sq. kms. Most of the area cannot be accessed for around 8 months of the year.In regards to Public transport it is virtually non existence around Zanskar valley, the valley is well known for its religion with widely scattered gompas & settlements at striking distance from the main highway. Most of the settlements of the valley are so remotely that can be only reached after days or the weeks walking.

Padum
It is the administrative headquarter of the zanskar region. This place is largely inhabited by Buddhists. The town also has small population of Muslims. It is the starting point of numrous difficult and long treks into the remote regions of Zanskar.Some of the tourist attractions of this town are the set of ancient rock carvings on a huge boulder near the riverbank, just below the old township. Another one is the Stagrimo Monastery that clings to a tree-covered ridge above the old town. Nearby is the ancient village of Pibiting. which has the fascinating hilltop monastery on display, which is a superb expression of'stupa' architecture.

Around Padum
Through a bridge at Tungri which is just 8 km of Pudum one can reach Karsha, which is know for its Karsha Gompa,It is Zanskar's largest Gelug- pa gompa and is looked after by monastery of Likir.It is a neatly whitewashed building that houses many chapels, The Individual monk's quaters & temples dates back to 10-14th centuries.The 3-day long Gustor Festival is held here during early July. Karsha can be reached by four hours Hike, By road or by three hours raft on the doda. to hike up at the gompa one has to start in early morning due to mid afternoon icy storms, this small hike is a real test of endurance & is possible for athletic & determined travellors. En-route to Karsha there is another big Gompa at Sani, which is the oldest in Zanskar & the only one built on the valley floor. 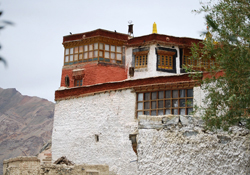 The gompa of Sani is closely related with my episodes of Mythology & History as well. Behind the main temple is "Kanishka Chorten" which is believed to be established by Kushan King Kanishka during 1-2 century,The main hall houses a prayer hall with an array of statues of Buddhist legends and the Drugpa. there are two other temple, one of them is permanently locked, where "Naropa" is said to have Meditated 900 years back & the other one is "La-khang" which enshrines unique bas-reliefs of gold faced icons of manifestations of Guru Padmasambhava , apart from the temple there is one 2 mts high stone figure of "Maitreya" carved out some time between 8-9 centuries.

Stongdey
Stongdey ia 18 kilometres to the north of Padum,the major attraction here is the Gon-Khang,which is placed under tight security. It has got several fierce-faced veiled images of deities & assumed to be the guardians of the Buddhist pantheon.