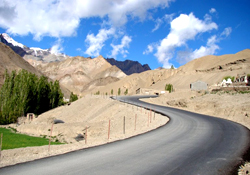 An interesting route which is little travelled in it middle part because pack animals cannot be used.

Day 01 : Lamayuru - Prinkiti-Ja-Hinju , 7hrs.
From the monastery , go down towards the village , cross a stream , gentle climb across the mountainside , then a little valley towards the Prinkiti-La ( 3750m) which is crossed after a short climb. Go down a narrow gorge to the village of Shilla . Cross a river on a bridge , then on the right bank to Wanla ( 2 ¼ hrs , possible to find fresh supplies in 1985 ) . Go along the left bank of the Yapola for another 2 hrs until reaching the village of Phenjilla , after crossing the river (bridge) . From Phenjilla , go up a valley leading off at right angles (north-east ). After one hour , leave a valley on the left { Hiking Tour No. 10 Lamamyuru - Alchi by the Tar -La } , then another hour to Hinju.

Day 03 : Sumda - Dundunchen -La -Chilling , 6-7 hrs.
From Sumdo , carry on in the main valley ( which changes direction after 1 ½ hrs ) ; the path becomes more difficult to follow until reaching shelter formed by the rocks. Opposite these small houses , there is a bridge , cross it and start climbing the Dundunchen - La. Shelters and pastures half way up , then steep climb up to the pass ( 4800m).Beautiful view . From there , go down along the mountainside (south ) then down the slope (steep) . You reach a house high up in the valley. Then take a valley which gets narrower and narrower until reaching Chilling. Not very much water along this stretch. The inhabitants of Chilling are the only ones to work with metals such as copper , tin , silver used for the making of ladles , tchang pots , tea pots etc 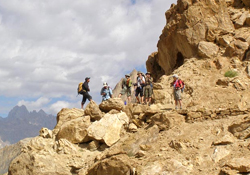 Day 04 : Chilling - Shingo , 5 ½ hrs.
From Chilling , follow the Zanskar river upstream for several hundred metres. Ask for man in charge of the cable car in Chilling. Cross the river in a cable car (Rs. 5 ) , then take a good path until Skaya ( 2 ½ hrs ) . A little beyond the village , go into as narrow valley. (Here you find Hiking Tour No. 13 Stok - Hemis by the Markha Valley .) Three hours after Skaya , you arrive inShingo , 2-3 hrs , good campsite.

Day 05 : Shingo - Ganda- La - Rumbak , 4 hrs.
From Shingo , long easy climb to the Ganda -La ( 4700m / 2hrs) , then easy descent into a beautiful valley. Pass the village of Yurutse ( beautiful house ) . A little ways on , cross the river onto the right bank , then go along the mountainside until you cross an escarpment which leads into the valley of Rumbak ( small gompa ). { From here , easy route (no pass) leading to Zinchen and Spituk in one day.}

Day 06 : Rumbak - Stok-La-Stok (-Leh ) , 5 ½ hrs .
From Rumbak , follow this beautiful , gently sloping valley. Then a very steep and difficult footpath rises in sharp zigzags up the Stok-La ( 4900m , 2 ½ hrs ). From the pass , steep descent to the summer pastures belonging to the inhabitants of Stok , then easy going . Half an hour beyond the camp , you reach the river which comes down from the Stok -Kangri massif. Follow the left bank of this river as far as Stok . From there , there is a bus to Leh once a day.