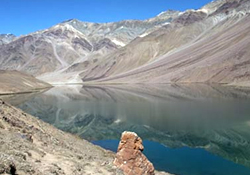 Wonderful hiking during which one discovers the southern and northern side of the Himalayas.Crossing the Umasi-la glacier can be tricky (if possible , take a rope and ice axe with you).It is not advisable to go through the pass in bad weather. The best period is from end of July to the end of September . Allow 10 days.

Day 01 : Kishtwar-Galhar-Labradi, 4.5 hrs
Leave at six 'O'clock in the morning taking the local bus to Galhar ,arrive at about 10 am . End of the road situation for motor traffic, hiking begins.At first , easy track, but very soon the walking gets hard , after 4.5hrs of discouraging up-and-down arrive in Labradi where two dillapidated house built against large rocks serve as inns.

Day 02 : Labradi -Atholi , 10.5hrs.
A long day consisting of never -ending up and down cross picturesque bridges over the Chenab river.Then, the track goes away from the gorges and rises gently through a few villages as far as Atholi which is the major village in the valley with its unusual temples symbolizing the blending of several religious.Two comfortable inns.

Day 03 : Atholi - Chichkot , 9 hrs.
Cross two bridges to reach the right bank of the Dharlang.Cross through several villages.As you go furhter, the vegetation, which is made of many species of trees , is replaced by wonderful cedar forests.Deafening roar of the churning river.Finally , Chichot , one of the first padder-pa villages , surrounded by beautiful fields. A few hundred metres after the village ,very comfortable inn.

Day 04 : Chichot-Hangoo , 4 hrs.
Short stretch . Walk along the river .Scenery changes: the pleasant cedar forests are replaced by rockier terrain. In Hangoo , camping possibilities behind the village after obtaining authorization. view of the snow covered peaks. 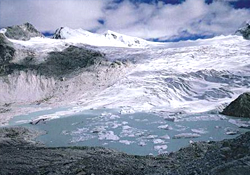 Day 05 : Hangoo -Sumcham -camp at the glacial plateau, 6hrs.
After leaving Hangoo , go strainght to the police station.Vegetation gets more sparse.Go through Sumcham , final village before the pass well known for its proximity to countless precious stone deposits.Steep rise to a magnificent former glacial plateau. From here on , wood becomes very difficult to obtain.Camping at edge of plateau in wonderful fields of edelweiss.

Day 07 : Camp near the stream -camp at the cliffs , 6 hrs
Leave very early in the morning and walk among large rocks. Very soon , you pass onto the ice which is still covered with large stones and boulders.You now see the long glacial which must be crossed .After 2.5hrs of walking on the bare ice with small rivulets (the best route is marked by small cairns maintained by locals) , you arrive at the foot of an ice wall. Leave the glacier on the left towards the rocky and very steep slope opposite.After climbing it , walk in the direction of the cliffs and camp at their base (possibly beneath shelters formed by the rocks)

Day 08 : Camp at the cliff -Umasi-la-camp near the bridge, 8hrs.
Leave at day break .Walk along the cliffs as far as the glacier.Go up the glacier keeping to the left (2hrs).Turn left climbing the snow slope which leads to a high plateau.Avoid the basin by walking round it to a high plateau.Avoid the basin by walking round it to the right , that is , making a large detour on the left.Once at the base of the peaks, do not miss the small gap leading to the pass. Umasi-la at about 5300m with very beautiful panoramic view .Long and dangerous descent through snow (ice axes,ropes )leads to the glacier.At the bottom of the slope ,walk to the middle of the glacier (watch out for crevasses).Follow it quickly , 3hrs walking on the ice.At the end of the glacier walk along the stream on the left bank , through large rocks.Cross the bridge and immediatley you see a beautiful campsite. 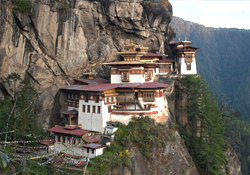 Day 09 : Camp near the bridge -Ating , 9hrs.
Leave rather early , long descent across the pastures .in the late afternoon you see the Dzongkhul monastery on the opposite bank.Arrive in Ating towards the end of the day.