Superb way to go to Zanskar. Further into the mountains and three days longer, this route provides a better acclimitazation than the one through the Shinkun-la. The best period to do it is from July to October.

Day 01 : Darsha -Patseo, 3hrs
Go in the direction of Darsha village for about 300m.At the first group of houses , go up the steep incline to the left which leads to the Manali-Leh road. Folow it to Patseo. Easy going , a stream crossing . Pass the bridge to go to the inn.

Day 02 : Patseo -camp by the river , 5 hrs.
Follow the road , open valley.After about two hours , you reach a place called Zinginbar (house in ruins).A ways beyond ,there are shortcuts up between the sharp twists in the road. Cross a military camp 1.5hrs to the bridge. Pass it , then take the short cut on the right .Possible to camp at the river's edge.

Day 03 : Patseo - Camp by the river -Baralacha-la -Sarchu bridge , 6hrs.
Follow the road or take the short cuts.Several steep rises , a plateau and a final slope leads to a lake.Finally , large pastures and the Baralacha-la cairns (5300m , 2.5hrs). The road continues on the left bank of the Tsarap. Firns possible in July.Long descent to a broad , alluvial plain closed in by a moraine which one goes around to the right.A further 1.5hrs to the Sarachu bridge(several houses in ruins).Good campsite.(Another campsite 30 min. away if you leave the bridge on the right)

Day 04 : Sarchu bridge - camp in the high valley , 8hrs.
Leave the bridge on the right.You leave the road for the last time.Walk along the river through the pastures.Cross a broad stream.Sarchu plain.The trail follows the mountside .Where the valley widens , go towards the left into a high desrt valley.Shepherd's huts on the left(4hrs).Sandy valley , continue up it.Cross two canyons.Choose a campsite near the second on the basis of available water. 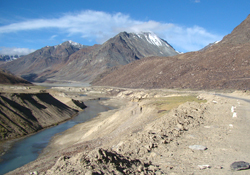 Day 05 : Camp of the high valley -camp of the Phirtse-la , 7hrs.
Leave early (broad river to cross).First ,four easy crossings of canyons.After about 2.5hrs , you arrive at a broad river.Find a good ford .Next , climb to the plateau .30 Min. later , shepherd's hits , then manis .Now the valley narrows , path on mountain side.Before reaching the confluence , climb a steep slope leading to a small pass.Go down to the river which comes from Chunik Marpo. Go upstream to a ford ( 1 hr. after the shepherd's huts).Path on left bank to go upstream.The valley widens.Large combs to be crossed ,short climbs.the camp used as base for going up the phirtse -la is situated opposite , at the edge of a stream. Further down , summer campsite for Zanskari shepherds.

Day 06 : Camp of the Phirtse-la-Phirtse-la-camp on the western slope , 7hrs.
First tracks are difficult to find .After half an hour , grassy flat.Then you can see the path. Cross the escarpment and walk down to the stream(large rock with hollows).Go up the opposite slope. Phirtse-la (5450m,4hrs).Beautiful and very steep descent on uneven ground.At times the ice can be seen. At the end of the slope , follow the path which leads to the river.Go over to the left bank (5hrs).Follow the valley to the river where it widens after 1.5hrs.A furhter 30 min. and you reach a good place to camp , 50 mts. above the river.

Day 07 : Camp on the Westermn slope -Tanze , 5hrs.
The path leads away from the river , gradually up the slope (the river gorges are too difficult for animals ).First view of a rocky escarpment .Further on , a pass with cairns and pastures. Fantastic view of the Zanskar valley and the first village since Darsha.Go to a basin then pass behind a rocky bridge and carry on towards steep gorge.Cross a small , hard going for the horses. Arrive in Tanze where you meet up with Hiking tour No.1 Darsha -Padum by the Shinkun-la. Tanze,a small village , gompa in ruins a bit higher up.

Day 08 : Tanze -Purne , 5hrs.
A short distance beyond Tanze , a bridge crosses to the left bank .Monotonous going across morainic terrain.Slight rise leading to Kuru , major village of Livestock breeders.Afterwards , an excellant path leads steadily lower.Arrival in Teta (2.5hrs ) , beautiful village.The path continues downward near the river.Stay on the left bank.Then climb gentle slope up to Jal.Next comes a steep descent towards a large bridge which you cross to get to Purne.You can either set up camp somewhere before the house , or pay 10 Rs. per tent on an adjacent lot.Watch your things.

Day 09 : Purne -Phuktal -Purne , 4hrs.
Leave the horses in Purne. Go up the left bank of the Tsarap into splenddi gorges.After 1.5hrs , cross a bridge in good condition (in 1985).Fifteen minutes later ,you arrive at a small tributary to the Tsarap , beautifully clear water cascading down.A ledge leads to a small plateau sprinkled with chortens and religious banner.From there , one can see the Phuktal monastery , one of the most spectacular sights in Zanskar.Phuktal belongs to the tradition of the Gelupas(yellow hats).The spring that gurgles deep in the cave is still out of bounds to women.The Hungarian historian Cosma de Koros stayed there over the winter of 1825-26.It is possible to find food and lodging at the monastery. 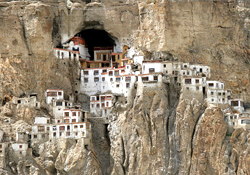 Day 10 : Purne -Ichar , 5-6hrs.
From Purne , go back down , cross the bridge, then go up the left bank. The trail that overhangs the Tsarap is sometime tricky and hard going.Frequent small canyons of pudding stones.Pass a bit above a hanging bridge whcih leads to the village of Cha.(From Cha , it is possible to go to Phuktal horses , which is dangerous) 2 hours later , one arrives at Kaydang , a small village in a poplar grove. Carry on until Hamuni (tea shop).Pass below the village of Surle.The trail is still not good , several streches difficult for the horses.Arrive at a large bridge which leads to Ichar.Very good camp. Interesting fortified village.

Day 11 : Ichar -Mune , 5hrs.
Cross back over the left bank , then a gradual climb before coming to a major tributary (bridge). Gradual descent down towards Reru , then quite a beautiful plain covered with flowers (july) as far as Mune.Possible to camp opposite monastery.

Day 12 : Mune -Padum , 5hrs.
From the monastery , go down a steep incline to the main trail.After two hours , one arrives at Barden Gompa , a Kagyupa monastery famous for its prayer wheel (180cm high).From Barden , a dusty road suitable for motor traffic leads to Padum without difficulty .Several quite beautiful villages on the the opposite bank . Padum ( 3650 m) : possibilities for fresh supplies uncertain (only rice , tsampa, sugar , tea and sometimes kerosene), several hotels , a restaruant (1985).Passport control. Camping possibilities 1 Km down the road to Kargil.